Contribute to an IRA Before the May 17th Deadline

The current job market landscape is a warning sign of how painful the U.S. economy is for many, as over 745,000 Americans filed for first time-unemployment claims at the end of February.

But then on March 5th, the February employment report showed the U.S. economy added 379,000 jobs in the month. This was more than double January’s gain and the best growth since October. And February’s employment report also showed that over 350,000 jobs were added within the leisure & hospitality sector, which could point to a recovery in that hard-hit segment of the job market.

Without engaging in the controversial debate as to whether the current job market landscape does or does not support the argument for additional targeted stimulus, there is another side to this conversation that we need to remember too: continued monetary stimulus might lead to inflation, maybe even hyperinflation, which could be bad for your retirement.

As such, there are two data sets that are worth examining when thinking about inflation and the impact on your retirement nest egg: the rise in the 10-year Treasury yield and the price of West Texas Intermediate Crude oil. The first might foreshadow inflation whereas the second might contribute to it.

The yield on the 10-year U.S. Treasury has more than doubled in the past year: 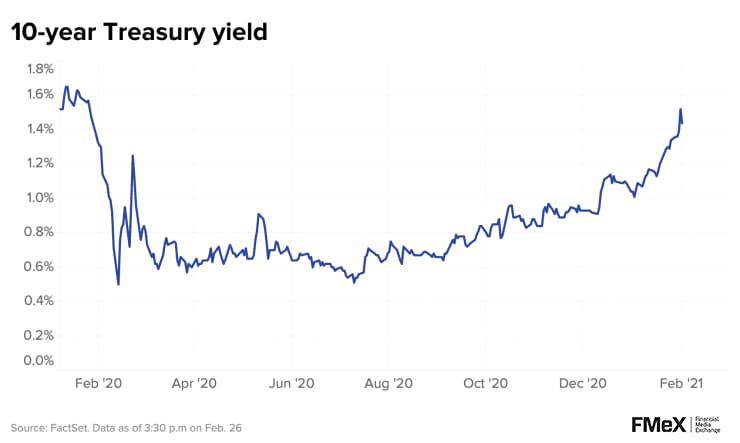 And the climb in bond yields will absolutely impact the stock market (to what extent is anyone’s guess). In very simple terms, when bonds are paying higher yields, they can become more attractive to many investors, causing them to consider moving out of lower-yielding equities and into the steady income of bonds. In other words, there is an inverse relationship between stocks and bonds. This is the push-pull-dance that has been going on between the bond and equity markets forever.

Consider one of the ways in which Treasury yields will affect you directly: mortgage rates.

As yields rise, banks realize that they can charge more interest for mortgages of similar duration (which is why rising rates are generally good for the Financials sector). And while the correlation is not perfect, generally speaking, the 10-year Treasury yield affects 15-year mortgages and the 30-year yield impacts 30-year mortgages.

West Texas Intermediate Crude is trading at about $65/barrel, a price not seen in about 2 ½ years, but the increase in the past 3 months is dramatic. 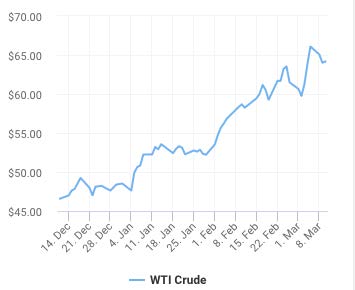 Oil and inflation are linked because oil is such a huge input into our economy. And as a barrel of oil rises in price, that means fueling our cars and heating our homes gets more expensive. But oil is also used in the production of plastics too. So as the input prices (oil) rise, so does the end-product (that plastic gadget). That means that plastic gadget is more expensive, which is the very definition of inflation.

The glass-half-full economist would rightly suggest that higher inflation is the product of a healthier economy and rising demand, so a move toward higher longer-term rates is actually a sign that confidence in the economic rebound is also rising.

But at some point, as the rebound from the COVID-induced-bottom runs out of steam, inflation pressures could cause the Fed to intervene by hiking rates. Remember when the Fed initiated its first rate hike at the beginning of 2016? There was a 10% correction in the market. And then the stock market corrected again in 2018 when Wall Street thought the Fed had hiked rates too high.

But by all estimates, we are a long way from the Fed considering rate hikes. Or are we? 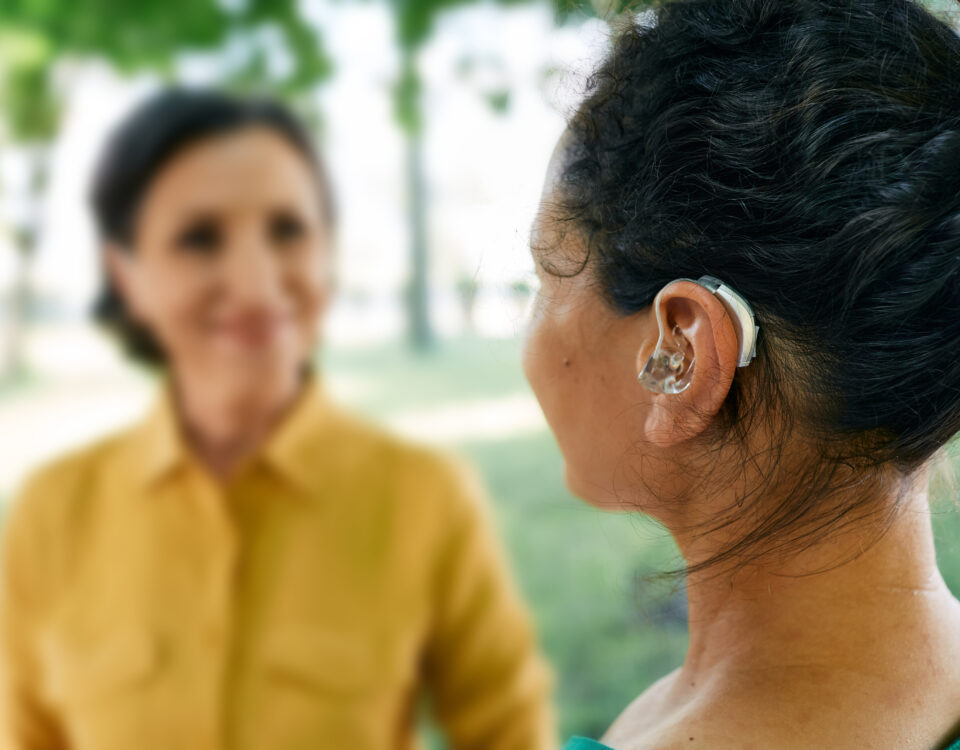 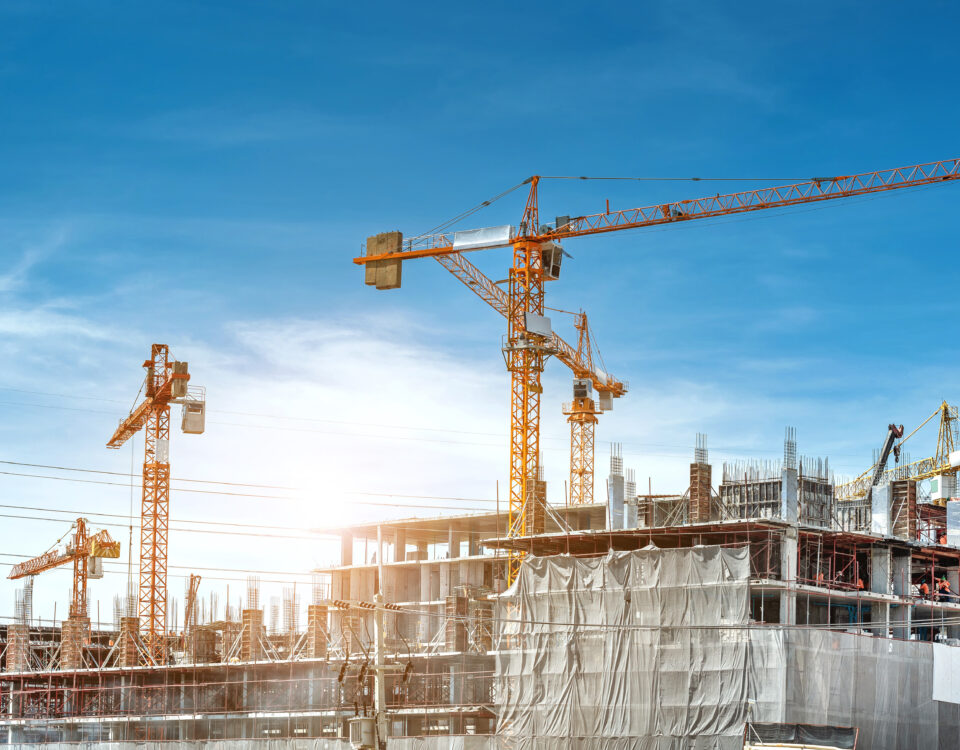 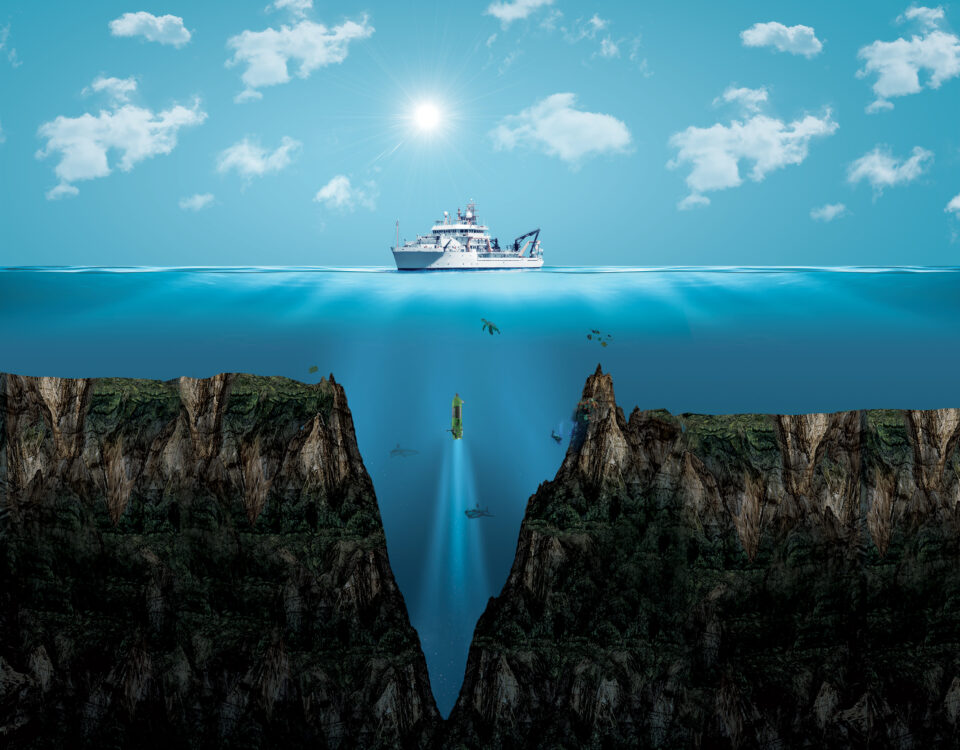